When is Acupuncture Used in the Ear?

Did you know that there are over 200 acupoints in the ear? While this little organ may seem like a strange candidate for treatment, acupuncture of the ear (auricular acupuncture) can actually be used to treat a variety of unrelated conditions, from pain to anxiety to substance abuse.

When used in conjunction with other acupoints and forms of alternative medicine, auricular acupuncture can have significant and lasting effects. Let’s take a look at some research concerning ear acupuncture as well as some conditions it can be used to treat.

Acupuncture of the ear is an ancient practice and form of Traditional Chinese Medicine (TCM). It has been mentioned in Chinese literature as early as 770 BC. In recent years, a significant amount of research has been conducted to support existing observations and form new theories concerning the use of auricular acupuncture for a number of conditions.

In the 1950s, French doctor Paul Nogier published “Treatise of Auriculotherapy,” a book that made connections between different points along the external ear and internal organs and body systems. He found that the shape of the ear resembled that of an inverted fetus, and organs on the model fetus corresponded with points on the ear, as shown in the figure below. 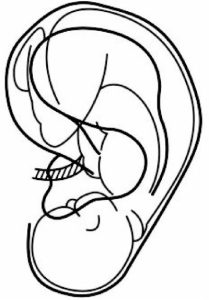 Developed by Dr. Nader Soliman, SAAT is a new form of auricular acupuncture used for treating different types of allergies, including food and environmental sensitivities. A single needle placed in the ear has been proven to reduce allergy symptoms by 80-95%. SAAT works by “reprogramming” the immune system, resulting in long-term relief.

Besides treating allergies through SAAT, acupuncture of the ear has been proven to be able to treat:

Acupuncture is a safe, painless, affordable, and highly-effective form of treatment. Being minimally-invasive, it requires no recovery time–in fact, many patients experience immediate results!

If you are seeking a licensed, experienced acupuncturist in the Louisville, Kentucky area, consider contacting River City Wellness. At River City Wellness, authentic, compassionate service is our greatest priority. We offer acupuncture, herbal therapy, moxabustion, cupping, and much more. You can schedule an appointment online or call (502) 822-0626 for details.